ExpoForum JSC takes active part in charitable campaigns for children organised under the auspices of the City of St. Petersburg and the Ladoga Episcopate of the Russian Orthodox Church. And so it was that on the eve on New Year’s 2012, following an appeal from the Arch-Priest of Sophia Cathedral in the Town of Pushkin, Gennady Zverev, that the company acquired lighting equipment for the theatre of the Parochial School of Saints Cyril and Methodius, Equals of the Apostles, and financed the purchase of children’s Christmas presents. Moreover, holiday trinkets from ExpoForum were joyously received by the young children forced to greet New Year’s and Christmas (per the Orthodox calendar) at Municipal Children’s Hospital №2 (St. Mary Magdalen). 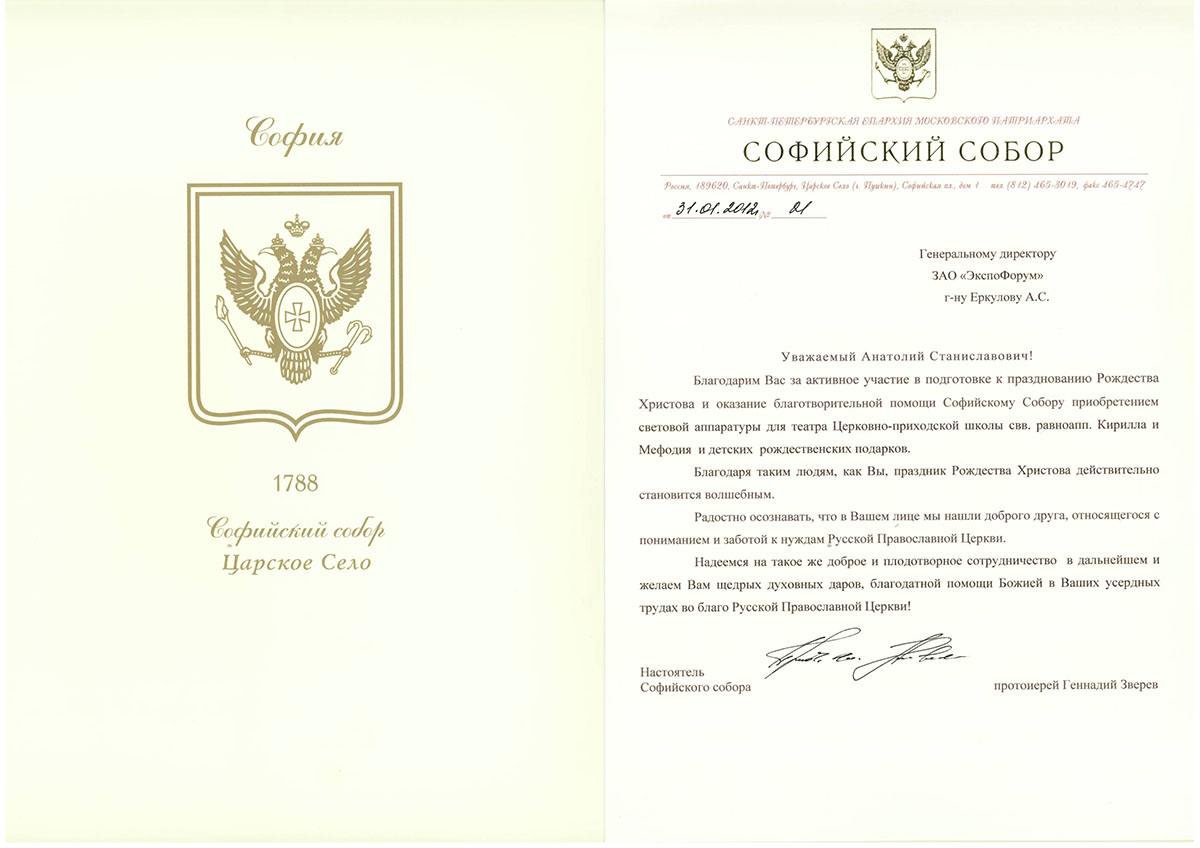 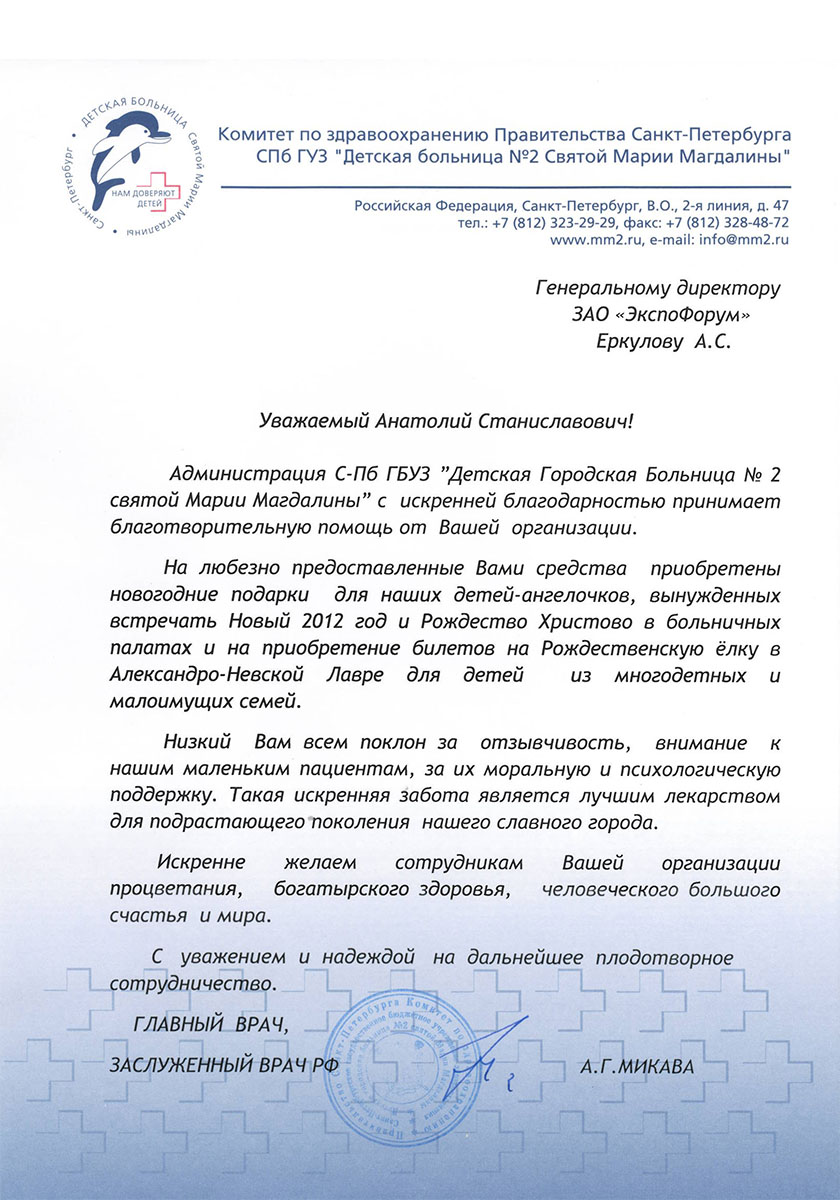 Assistance for Residential School №4 for Children with Developmental Disorders

On 26 December, the General Director of ExpoForum International received a letter of gratitude from the Director of Residential School № 4 for Children with Developmental Disorders, Andrei Alexeenko, for the company’s assistance in the purchase of New Year’s gifts for the institution’s young wards. 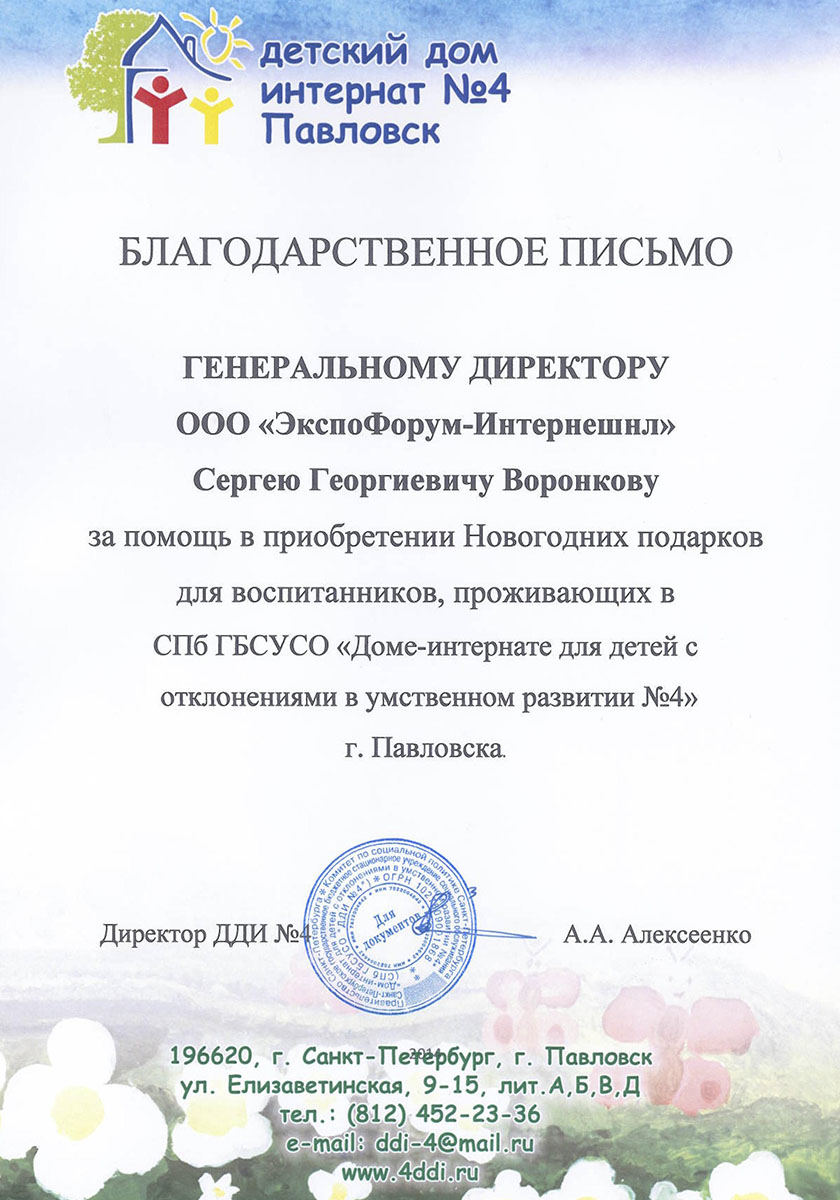 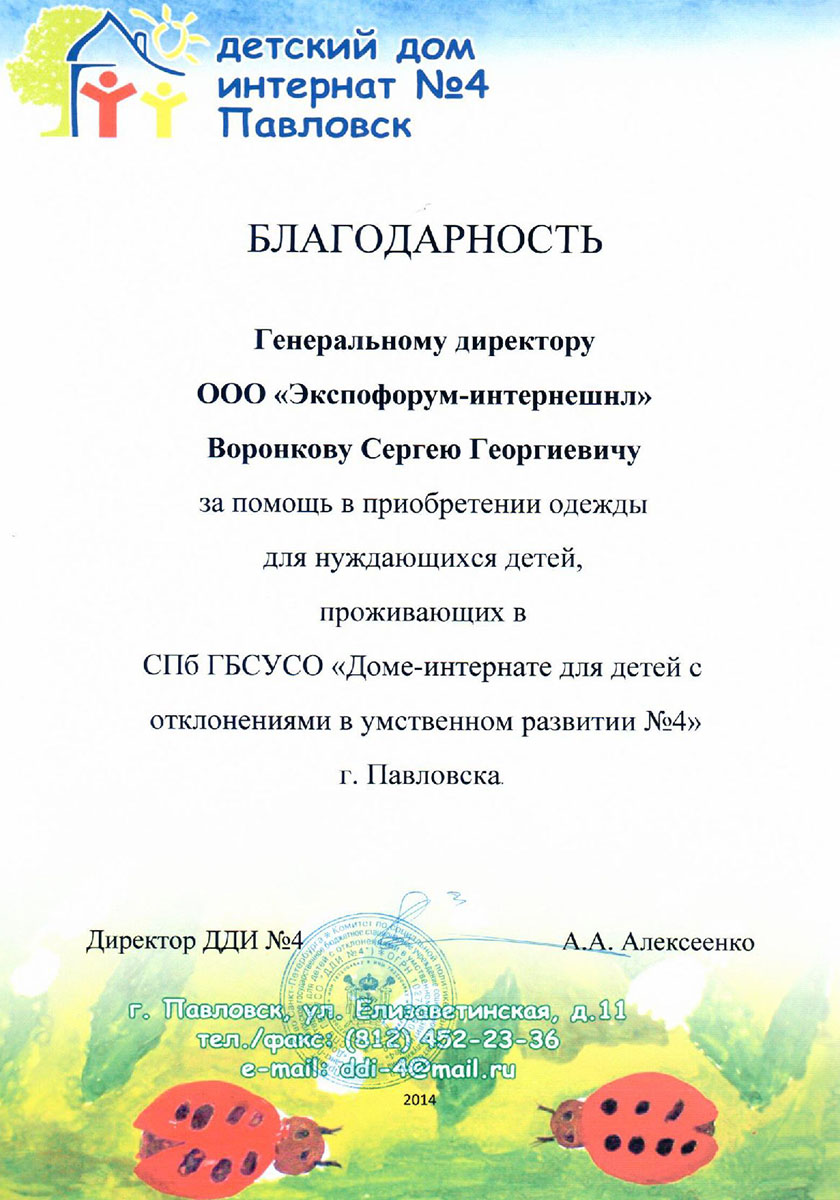 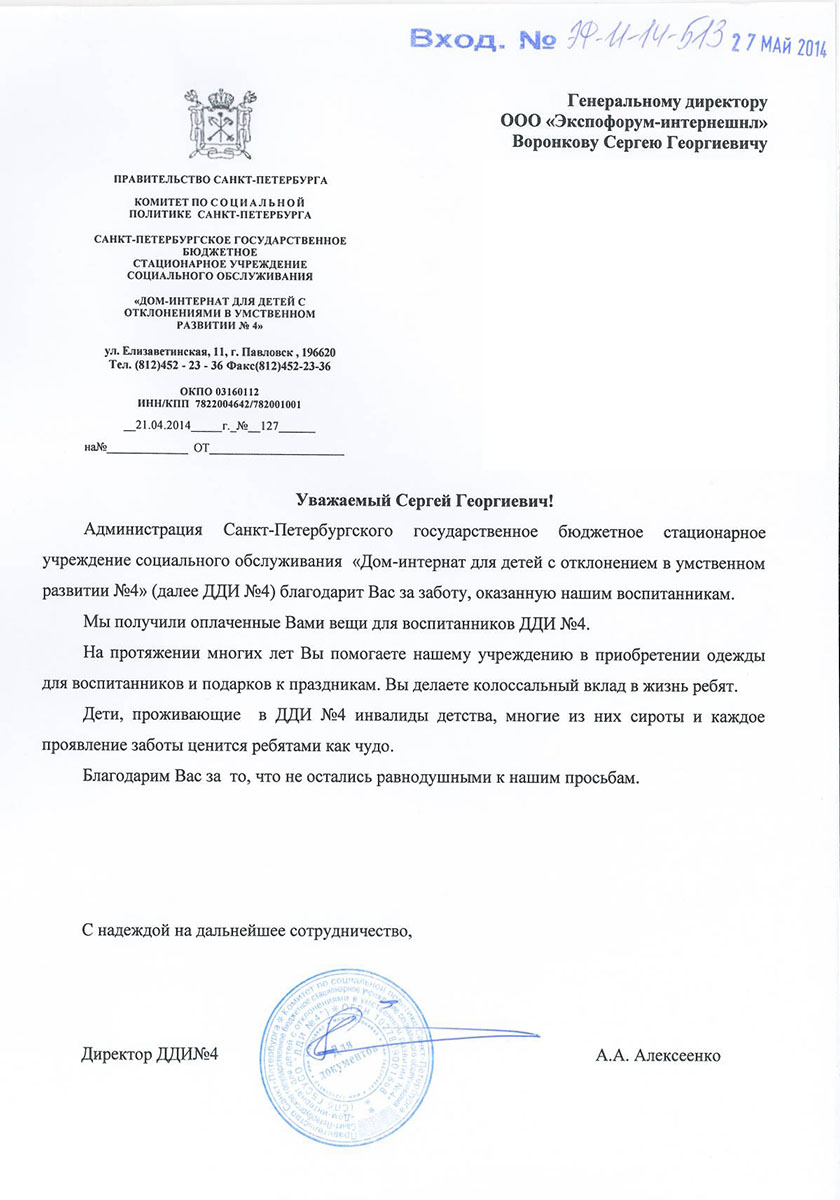 Participation in the “Golden Pelican” movement

ExpoForum International is a proud member of the charitable social movement “Golden Pelican.” The scope of its activities encompasses the “Talking Book” programme, aimed at the creation of specialised literature for visually-impaired children and the opening of audio-libraries in St. Petersburg and throughout Russia. In order to further implementation of this socially-significant project, the Lenexpo Exhibition Complex and ExpoForum Convention and Exhibition Centre have been equipped with vending machines offering special souvenirs. By purchasing commemorative St. Petersburg coins at the machines, convention-and-exhibition participants can do their part towards a good deed.

In 2014, roughly 2,000 people took part in the programme, and proceeds from the sale of the coins totalled RUB 191,700. The collected funds were earmarked for the recording of six comprehensive audio-textbooks – as well as for the circulation of previously-recorded literature, which was subsequently forwarded to correctional schools in the Northwest region and other areas of Russia. 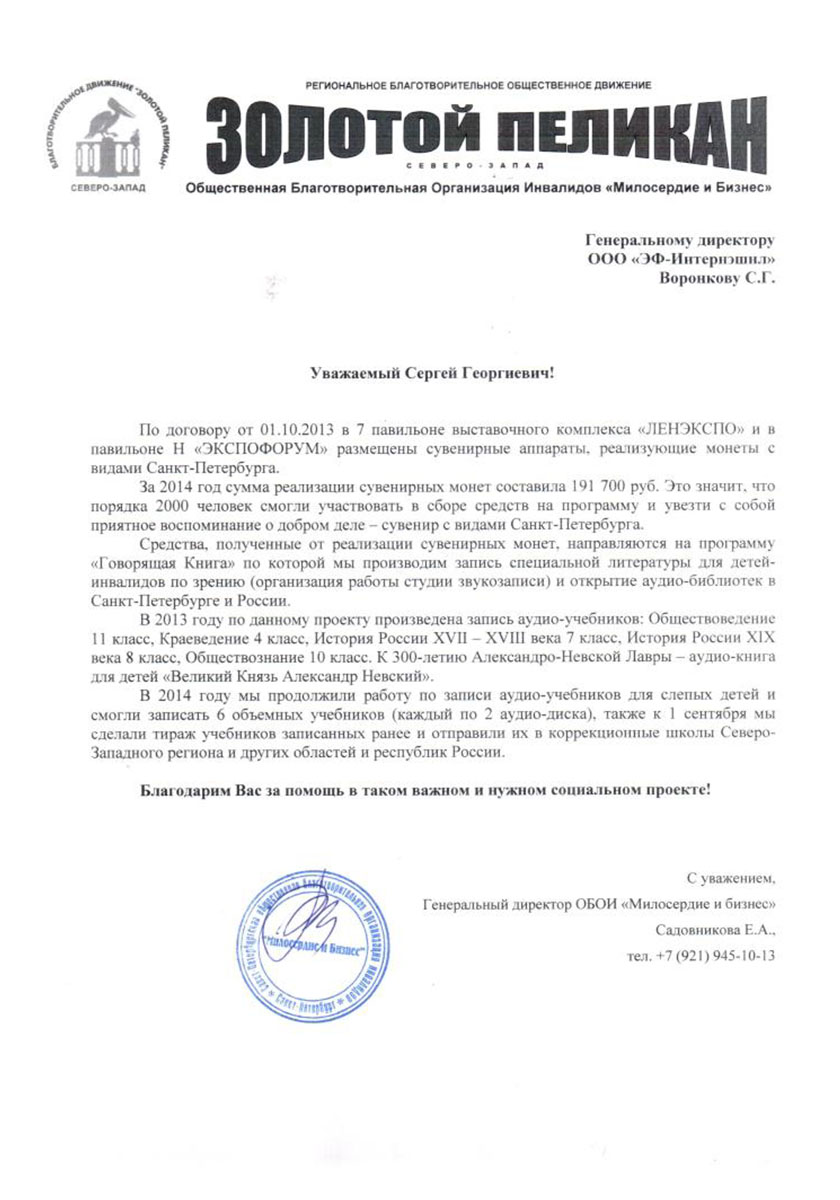 The reconstruction of the Russian Orthodox Church

Construction of the new ExpoForum Convention and Exhibition Centre unexpectedly unearthed traces of the foundation of the Russian Orthodox Church of the Smolensk Mother of God Icon, built in the Village of Bolshoe Pulkovo in the 18th-19th centuries according to a design by the famed Italian architect Giacomo Quarenghi.

The church was destroyed during the years of the Great Patriotic (Second World) War. ExpoForum JSC decided to take this fortuitous opportunity to honour the legacy of this great Italian architect, who made such a tremendous contribution to the creation of St. Petersburg’s magnificent skyline, and restore the church according to the blueprints of the master architect and surviving archival photographs. It was this goal that led to the creation, with the blessing of the Russian Orthodox Church, of the Charitable Foundation for the Restoration of Christian Cultural Landmarks, one of whose proud founding members has been ExpoForum since 2010. 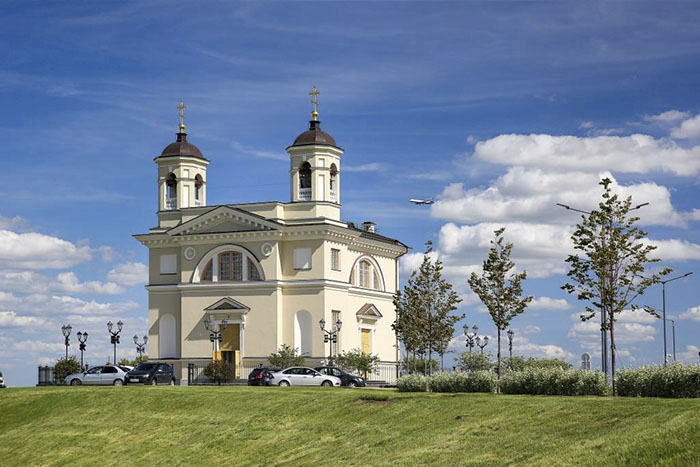 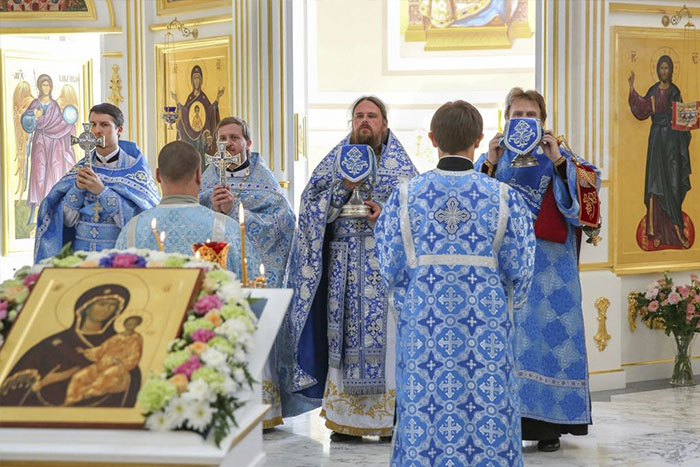 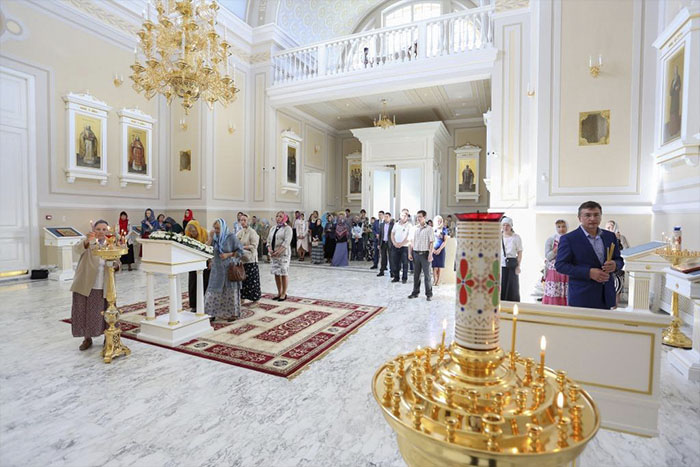 On 16 August, the Meridi an Line was opened after restoration at the Pulkovo Astronomical Observatory. Destroyed during the Second World War, this memorial to our historical and cultural legacy was restored as part of an agreement between the Observatory and the Foundation for the Restoration of Christian Cultural Monuments, of which ExpoForum is a founding member.

The Meridian Line, which marks the Pulkovo Meridian, is situated on the northern slope of Pulkovo Mountain in order to delineate the national prime meridian of the Russian Empire, which was used to measure geographical longitude on maps right up until the 1920s.

Restoration work began in summer 2012, and was carried out by the restoration company Petersburg Renaissance. To date, around 300 metres of the Meridian Line have been restored and around 3,600 square metres of park adjoining the historic monument have been landscaped. 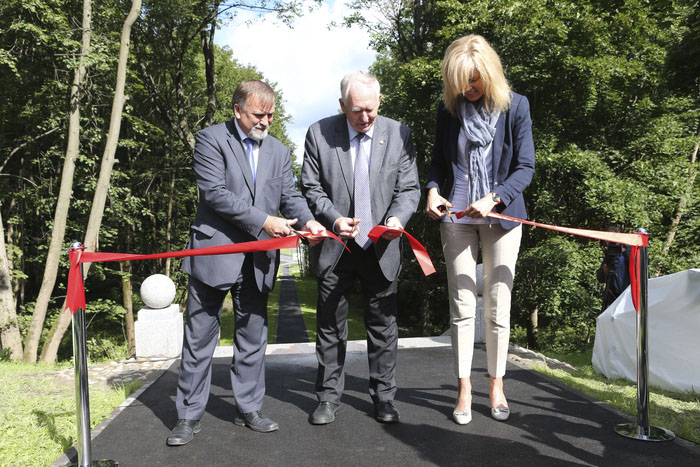 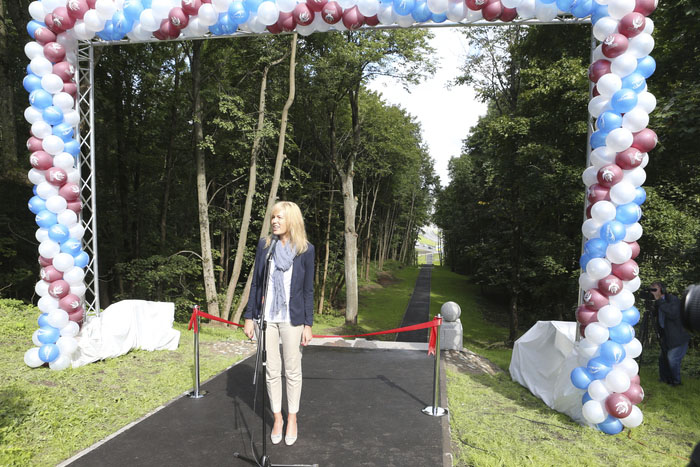 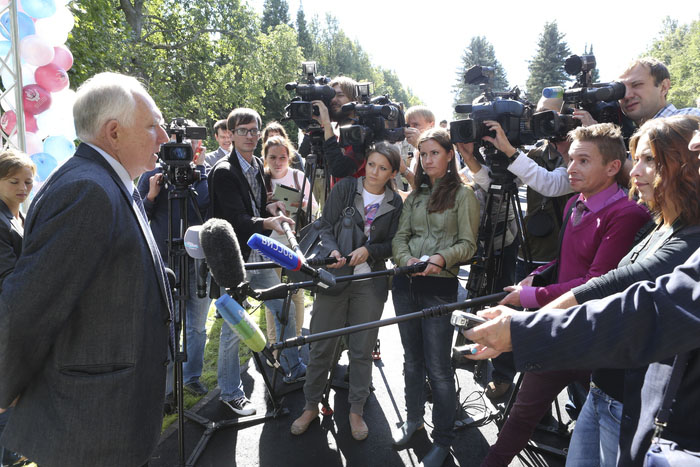 Implementation of the ExpoForum Convention and Exhibition Centre in the city’s southern district turned out to be a powerful impetus for the development of road infrastructure throughout the entire area surrounding the complex. The company is financing design work aimed at reconstruction of the St. Petersburg motorway and the construction of new junctions, turnpikes and roads spanning an area in excess of 500 ha. Similarly, in conjunction with the municipal authorities, the question of supporting the convention and exhibition centre with railway tracks is being investigated, which would dramatically improve the transport accessibility of Pushkin District and the Pulkovo Business Zone.

The engineering capacity of the complex has been planned with surplus resources so as to ensure the possible supplying of adjacent areas.